Bordeaux undoubtedly has a lot to offer to those who are interested in architecture and design. Are you someone who loves to explore the rich facades in the city center? If so, great – I love them too. But in case you do not go wander around the outskirts of the town often, you have probably missed one of the most interesting architectural creations in Bordeaux – La Cite Fruges – Le Corbusier or Quartiers Modernes Frugès.

La Cite Fruges was constructed between 1924 and 1926, designed as the brainchild of the famous architect and urbanist Charles-Édouard Jeanneret better known as Le Corbusier in collaboration with his cousin- Pierre Jeanneret. The 51 (The initial plan called for more units to be made) houses were meant as an affordable but at the same time modern, comfortable living space for industrial workers in the area. The futuristic housing project was ordered by a local industrialist – Henry Frugès.

As a lover of architecture himself, Frugès discovered Le Corbusier’s work through his book – ‘Vers une Architecture’ or ‘Towards a New Architecture’. It was essentially a collection of essays where Le Corbusier developed his ideas on Modern Architecture and his work on those written creations was praised by Reyner Banham as “beyond that of any other architectural work published in this century to date(20th)”. Interestingly enough La Cite Fruges was not the first project the famous industrialist – Frugès, order to Le Corbusier.

The six houses build in 1924 at Lège-Cap-Ferret called – Le lotissement de Lège are the product of the initial collaboration between Le Corbusier and Henry Frugès. When Henry Baronnet-Frugès- a passionate lover of the architecture and an owner of a sugar fabric took over the management of the family business he bought a sawmill in Lège. He wanted to manufacture wooden crates in order to package cane sugar. Consequentially he decided to build a living space for his factory workers. Thus, the need for an architect arose and after being acquainted with Le Corbusier’s ideas thanks to his book, Frugès invited him and his cousin to work on his housing project at Lège.

Frugès dreamed big, he wanted “a vast meadow surrounded by pine woods, to build a garden city” and he acquired a property in the Pessac area with the idea to construct exactly that. The chosen spot was not a coincidence and was carefully selected due to some specific futures it had. First of all, the area was popular for its clean air at a time when the quality of the air in the center of Bordeaux was extremely low. At the same time, it was close enough to the industries where the future habitants worked. During this period tuberculosis was not a rare occurrence, so the fact that there was a sanatorium nearby was also a big plus. And it was close to the railroad as well.

The design was thought out with the idea of implementing a modern approach, favoring comfort on a high level never before seen amongst the lower working class but at the same time for affordable prices. The quality of urban space was extremely important. From the initial around 127 houses that the project consisted of – 51 were built, using sleek and clean geometrical shapes and simple, modular constructions. Seven types of houses were design – Zig-Zag, Quinconces, Jumelle (Twin), Gratte -Ciel (Skyscraper), Arcade and Isolée (Vrinat). The 7th type which was a version of the Isolée house was destroyed during the bombardments of WWI . 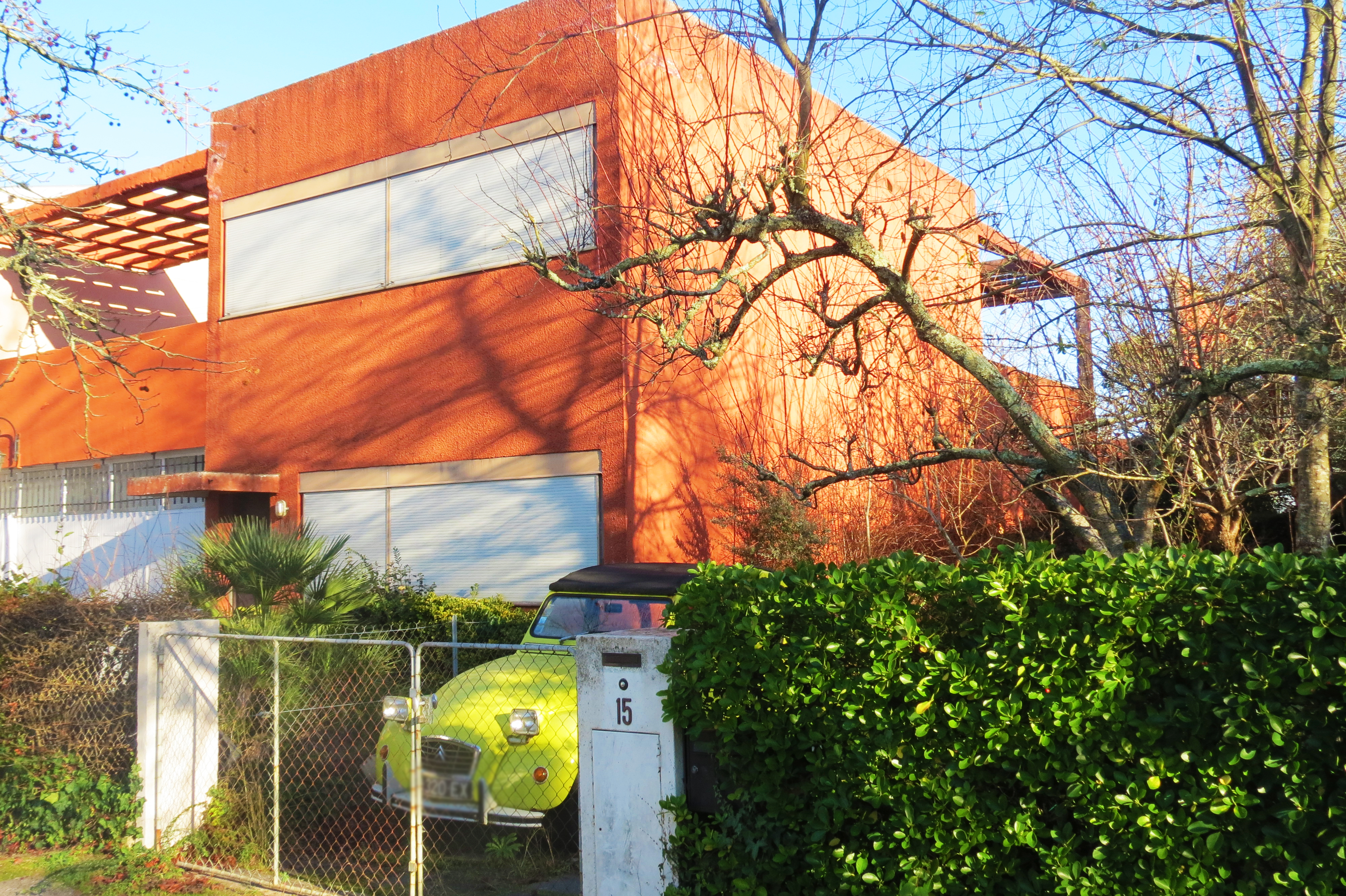 In order to achieve regularity of the housing project, utilization of the same main base elements is applied, using as a referral point a module with the 5×5 dimensions, plus a half module that is reapplied to create various combinations. Concrete was used for the main construction of the houses as well as reinforced concrete for the foundations.

La Cite Fruges is the first time Le Corbusier used color and the polychromy. Initially, the houses were white, but Frugès was not happy with the idea, maybe because they looked like a cube of sugar to him. In any case, he and Le Corbusier decided to use color to exaggerate some architectural features on the buildings and take advantage of the way the light played on the surfaces of the walls. Earth colors such as brown, blue and green were chosen to correspond with the idea integrations of the houses within the nature surrounding it.

Even though the houses were meant to be occupied by workers and constructed at a lower cost the project aimed to give the inhabitants the best possible living conditions. The houses had roof terrace and garage, bathroom with siphon and a utility room, a duct system. Luxuries even the bourgeoises were envious of. The ambitious project, unfortunately, was not completed due to financial problems. In 1983 The City of Pessac bought one of the Skyscraper houses that went through the initial, experimental renovations and was opened to the public in 1987. Today La Cite Fruges is considered one of the exemplary works for the Modern architecture movement.

I highly recommend visiting this beautiful neighborhood. It has something very special to offer with its quiet, relaxed streets and colorful, geometrical models that contrast so beautifully with the blue sky and the greenery around them. The first time you walk inside one of the rooms of the houses you can’t miss the way the light hits the space, brightening up everything. It was also quite interesting to see the people who live in these houses, making the space a living piece of art in a way. If you are interested in a tour inside one of the houses or you just want to know more about La Cite Fruges and/or Le Corbusier you can visit it for free with a reservation and you will be welcomed by a group of knowable and passionate guides.

Explore the beautiful city of Blaye

Le Cèpe 🍄 For today's post on the subject of

Who likes creepy stories? Bordeaux has many of the

There has been a problem with your Instagram Feed.